Node Records is pleased to release Stanley Clarke’s original score for the critically-acclaimed documentary “Halston” on Friday, June 7th, 2019, through all digital platforms. The film is being distributed by 1091 in select theatres on May 24th 2019 and nationwide on June 7th. 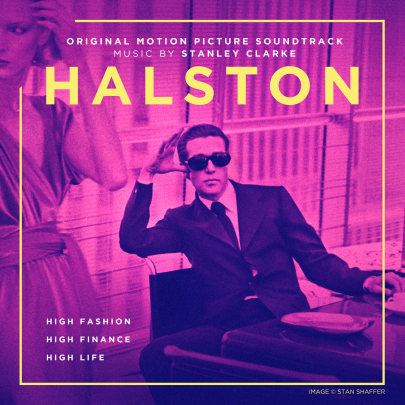 Halston Director Frédéric Tcheng (“Dior and I”) documents America’s first superstar designer’s rise to international fame in the 1970s through weaving archival footage and intimate interviews with Halston’s family, friends and collaborators including Liza Minnelli, Iman, Joel Schumacher, Lesley Frowick, and Jacqueline Kennedy. It is a behind-the-headlines look into the struggle between Halston’s artistic legacy and his fall to the pressures of big business. Halston is produced by Roland Ballester and Frédéric Tcheng, with producers Stephanie Levy and Paul Dallas, executive produced by T Dog Productions (Dogwoof) and CNN Films and music supervised by Tracy McKnight.

Frédéric Tcheng reflects, “The music that Stanley composed captures brilliantly the epic sweep of Halston’s career and the enigmatic aura of his persona, elusive yet intimate, a true American giant.”

Stanley Clarke is one of the most celebrated acoustic and electric bass players in the world, and an accomplished composer of more than 70 film and television projects including the Academy Award®-nominated “Boyz n The Hood,” the Tina Turner biopic “What’s Love Got To Do With It,” and “The Transporter.”

“’Halston’ was fascinating to work on due to the wealth of archival footage available,” explains Clarke. “Frédéric Tcheng sequenced the material in a manner that gave me an opportunity to maintain a storytelling continuity to the score. The soundtrack is melodic and is part jazz-combo dynamic and part orchestral with occasional elements of synthesized music acknowledging the era of the 1970s.”

Find out where to get the soundtrack here.